If you’re like us, once Thanksgiving is over it’s full on Christmas mode. Putting up the tree, hanging the lights, and revisiting our favorite ghosts of geekiest Christmas episodes past.

Buffy and crew are facing Christmas and or Hanukkah because let’s face it not everyone worships Santa, in this odd yet charming addition to the Buffy-verse. Awkward abounds as Faith, Buffy, Joyce, Giles, Oz and Willow all grapple with interpersonal issues.

The biggest issue of all sees Angel having an existential crises about being brought back from the demon dimenstion suffering an eternity of torture all the while Christmas happens around them.

While Angel is tortured by his past, the crew rallys together to help Angel break free of the first evil and fight for the good in him. As Angel stands ready to face the sun and Christmas had taken a backseat to story, Christmas ramps back up with the cheese to make for a very merry ending.

The Supernatural, A very Supernatural Christmas sees Dean try to inject the Christmas spirit into Sam the Grinch all while chasing down a murderous demon Santa who pulls dads through the chimney in front of their, now scarred for life, children.

There’s a lot of reminiscing about Christmas’ past as Sam comes to terms with his brother’s impending death… you know back when death still meant something on the show before we were all numb to Dean or Sam getting Kenny’d seemingly every episode. [insert OMG you killed Kenny, you bastard].

The laughs hit in this fun entry to the Supernatural series. In the end they take down the wholesome-esque Cunninghams and have a merry Christmas in the most Sam and Dean way possible… a seedy motel and gas station presents.

In a future where smart assistants have a fully aware consciousness uploaded and manipulated in a digital space and where you can be facebook blocked, but in real life, we find Matt Trent, played by Jon Hamm, with Joe Potter in a snowy cabin on Christmas day where they’ve lived together for the past 5 years barely speaking.

They finally tell their tales of death and intrigue on how they finally wound up in the cabin. A very mind trippy Christmas where morality of the future is muddled yet sees everyone get what they deserve in the end.

Abed has a hard break from reality as he goes full Christmas re-imagining the world as stop motion animation. The study group worries about Abed’s mental health and reluctantly go along with a plan by College Pyschologist Dr. Ian Duncan. He works to get at the heart of Abed’s distressing behavior by having the group play along in his delusions trying to force the narrative and ultimately write a book based on the crises. One by one the group gets picked off Willy Wonka style until an unsung hero who was just here for the cookies helps get Abed close to the finish line.

Eventually Abed comes to terms with some life altering news and the entire study group becomes more like family in Abed’s new reality.

Nothing says Christmas like a continent sized naked Santa orbiting above the US and definitely seen by the naked eye. Those poor people from Colorado. In this holly jolly episode, Rick introduces Morty to Anatomy Park, his Anatomy themed amusement park built inside of Rueben, a homeless man.

Rick and Morty must save Anatomy Park from the escaped exhibits by shrinking morty down inside of Rueben where they are greeted by Anatomy Park co-founder Dr. Xenon Bloom, an amoeba played by Jon Oliver who has a knack for showing up on this list.

The side story involves Jerry wanting to have a traditional Christmas with his parents until his mom introduces them to Jacob, her new lover, who has entered into a three-way relationship with his parents.

It’s definitely a fun ride through with an explosive conclusion.

Fry finds his first Christmas in the future to be a lonely experience. Everyone around him seems to be in the holiday cheer; however the customs and traditions he’s used to have been replaced or modified over the years.

While he wallows in his own self pity he fails to realize that someone else at Planet Express is even lonelier than he is. Leela, who was orphaned a child and is the only known one of her kind, is also having a hard time during Christmas. When Fry decides to snap out of it and get Leela a present, he is warned that staying out after hours is a bad idea because Santa will gun him down.

The robot corporation built a Santa Claus robot in the year1801 who rewards those who are nice and punishes those who are naughty. Through a faulty algorithm that judges people too harshly, this murderous Santa Claus judges nearly everyone naughty and seeks to kill them all.

The end sees Leela, Fry and the entire Planet Express crew facing down Santa, voiced by John Goodman and enjoying a nice rendition of Santa Claus is coming to town.

Doctor Who – A Christmas Carol

A space liner trying to land on an unnamed planet is trapped in an electrical cloud by a Scrooge-y old man by the name of Kazran Sardick. Matt Smith’s Eleventh Doctor arrives through the chimney and after learning some key information from Sardick, played by Dumbledore actor Michael Gambon, uses his trusty TARDIS, travels back in time to visit him regularly in his past with the hope of softening his demeanor in the present to save the space liner.

While Doctor Who’s first Christmas adventure came in the lost 1965 episode “The Feast of Steven” which included the original Doctor, played by William Hartnell, breaking the fourth wall to wish the audience a happy holiday, saying “Incidentally, a happy Christmas to all of you at home”, the modern series was the one to make it a tradition from 2005 to 2016. And perhaps none of them are as Christmassy as 2010’s “A Chrristmas Carol”.

Steven Moffat’s spin on Charles Dickens’ classic tale explores the past, present and future in a very Doctor Who way to help find a change of heart in a cruel stubborn man to help improve or save the lives of others. Charles Dickens himself appeared in the 9th Doctor episode “The Unquiet Dead”. This holiday Who features floating sharks, people in cryo sleep and Karen Gillan’s Amy Pond redonning her Kissogram attire. This episode is very much a standalone story and very friendly to those only slightly familiar with the 57 year history of Britain’s treasured science fiction series.

Doctor Who’s “A Christmas Carol” delivers a wonderful timey wimey tribute to the Dickens classic, leaving you with a similar holiday warmth upon its conclusion.

While you wait for Santa to bring the goodies this year, sit back and enjoy one of these holiday classics. If you feel we missed out on one of your favorite geekiest Christmas episodes, leave a comment and let us know. 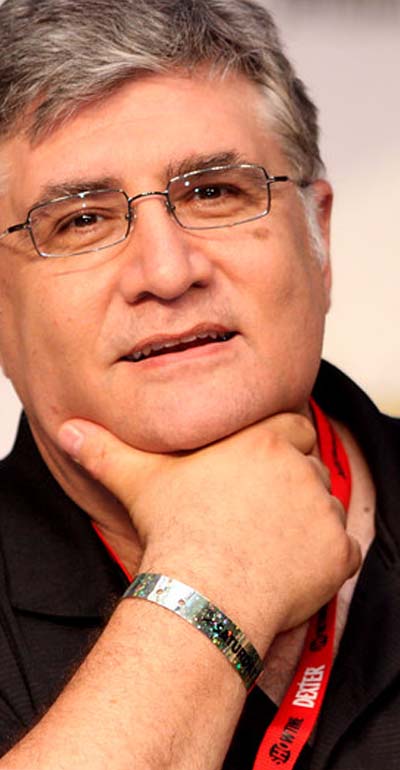 Don't let anyone fool you. We're all flying by the seat of our pants. Every last one of us. So why not try and do what you want to do, rather than feel like there's some "secret knowledge" that everyone else was given, and which you somehow weren't? The only secret, if there is one, is not giving up. Put in your 10,000 hours, and watch what happens.